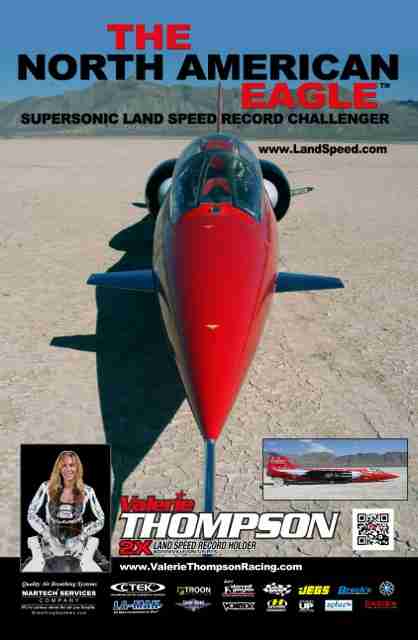 Other pages about Valerie:

KENT, WA – The North American Eagle™ (NAE) Supersonic Speed Challenger will be on display at the O’Reilly NHRA Northwest Nationals Drag Races in Pacific Raceways near Kent, WA. The Eagle display will be staffed by 3-time land speed record holder and Mojave Magnum “200 MPH Club” member, Valerie Thompson and team owner/primary driver, Ed Shadle. Both Shadle and Thompson are Northwest natives. The NAE team is based in the Puget Sound area with an all-volunteer team of American and Canadian engineers and former military personnel.

The NAE Supersonic Speed Challenger was built with the purpose of bringing the world land speed record back to North America. The British have held the absolute land speed record since 1983 and increased the record in 1997 to 763 mph. The NAE team will attempt breaking this record, as well as the female top speed record, currently held by Kitty O’Neil at 512 mph. Thompson will drive for the female record, while Shadle will drive for the overall top speed record. With the cooperation of the Bureau of Land Management and adequate funding, both those records will hopefully fall this year.
The NAE is a 50,000 horsepower converted F-104 Lockheed Starfighter jet, once flown by the most famous test pilots of the 50’s & 60’s. This jet-powered 4 wheel vehicle is designed to exceed 800 mph. Thompson is a Team Owner/Land Speed Racing Motorcycle driver who has competed in the All Harley Drag Racing Association and the National Hot Rod Association (NHRA), drag racing’s largest & most elite series. Thompson is a charter member of the “Mojave Magnum 200 MPH Club” and currently holds three motorcycle land speed records