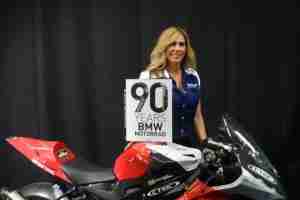 In addition to Thompson, other sports celebrities appearing at BMW Motorrad Days include four-time streetbike freestyle world champion Chris Pfeiffer, adventurer Joe Dakar and the five winners of the “One World. One R 1200 GS. Tour”.

“I can’t thank the wonderful folks at BMW Motorrad enough for the opportunity to attend this major event that draws BMW enthusiasts from around the world. I’m very excited since this is my first trip to Germany. I only wish I could bring my BMW with me for all the tours they’ll be hosting,” stated Thompson.

While in Germany, Thompson will also be the subject of a BMW Motorrad photo shoot by photographer Markus Hofman, whose celebrity clients include Tom Cruise, Adrien Brody, and Formula One drivers Ralf Schumacher and David Coulthard.

Thompson is a five-time land speed record holder and owner/driver of the Valerie Thompson Land Speed Racing Motorcycle Team who has also competed in the All Harley Drag Racing Association and National Hot Rod Association drag racing series. She set a personal best top speed and 1000cc Class Record of 212 mph on her BMW S 1000 RR during the March 2013 Texas Mile competition. Thompson is a member of both the Texas Mile 200 MPH Club and Mojave Magnum 200 MPH Club.