TEAM 608 RETURNS TO BONNEVILLE WITH TWO CARS, AND A MISSION: GO FAST – DO GOOD!

Grassroots racers run a Lakester and Roadster on the Salt Flats to raise money for, and awareness of, health-related charities.

Team 608, a 100% volunteer, grassroots land speed racing team, is comprised of lifetime hot rodders and drag racers who have been competing at Bonneville for more than a decade. Since 2006, Team 608 has raised and donated in excess of $95,000 for charities: Susan G. Komen For The Cure (Breast Cancer), Juvenile Diabetes Research Foundation (JDRF) and Autism Speaks. Next month, they are going back to the Salt to once again support JDRF

This year, the Dripps & Gibby ‘32 Ford Highboy that can run in E/Street or E/Gas Roadster, will join Team 608’s Lakester at Speed Week. Veteran Bonneville racer Robin Dripps, a T. David FitzGibbon Professor of Architecture at the University of Virginia, owns this tube-framed, Brookville steel-bodied Roadster. Bob Dauernheim, team crew chief and owner-builder of the team’s Dauernheim-Biglow-Davis Lakester, is responsible for most of the Roadster’s metal fab work, from chassis mods and floor to its hood, cockpit tonneau, air box, water tank and roll cage. Its NACA hood louvers were designed and fabricated by Gordon Smith and Ernie Cabrera. Co-Drivers are Robin Dripps and Rob Gibby.

Under the stunning steel body, painted by Jeff Davis’ Specialized Autocraft, is a custom chassis with an Indycar-style front suspension designed and machined by Hank Kleban and tuned by Chassis Dynamics’
Bob Cuneo. It features airfoil struts and coilovers, activated by bell cranks and mounted inside the engine compartment. Originally powered by an injected Bowtie Racing V6, the Dripps & Gibby Highboy has set two land speed records. Last year they switched to a V8 and, running in E/Gas, clocked 204.7 mph on the Salt.

In 1992 the Association of Collegiate Schools of Architecture (ACSA) honored Robin Dripps’ teaching with its Distinguished Professorship Award and, in 1999 her book, The First House: Myth, Paradigm, and the Task of Architecture, received a Phi Beta Kappa award. Her work has been published and exhibited in the U.S., Europe and Asia. And she has been a regular at various Mile Runs and Bonneville for years!

“We are self-funded and self-sustaining with 100% of the money we raise going directly to charities. It’s our way of pursuing our passion for hot rods and racing, challenging the record books, and giving something back,” said Team 608 crew chief, Bob Dauernheim. “Our mantra: GO FAST – DO GOOD!”

After setting the AA/FL (Fuel) record (290.49 mph) at Bonneville in 2009, Dauernheim’s Lakester was completely redesigned in 2011 to run on gas (AA/GL) and recently updated for Speed Week 2012. Bob Cuneo, designer and builder of the U.S. Olympic Team’s winning bobsleds, has been consulting with Rob Ida, builder of the Lakester’s body, to improve its aerodynamic qualities.

Next month Team 608 is bringing two cars with a total engine displacement of 841 cubic inches and 1,850 horsepower to Bonneville for an assault on the record books and to raise money for, and awareness of, the Juvenile Diabetes Research Foundation.

For more information about Juvenile (Type 1) Diabetes, an autoimmune disease that affects kids, teens and adults – from newborns to men and women in their late-30s – and the work that JDRF does, please visit http://www.jdrf.org/

Checks for (fully tax deductible) donations should be made out to Juvenile Diabetes Research Foundation or JDRF and mailed to Bonneville Racing Team 608, c/o Rob Gibby, 9 Timothy Lane, Bloomfield, CT 06002. 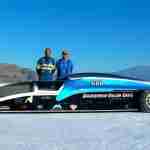 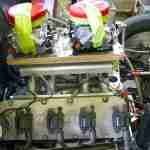 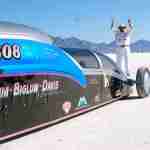 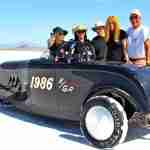 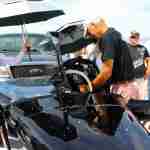 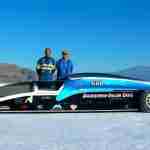 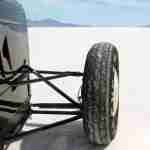